Bash on Windows:What it is , How Does It Work , Who Won The Game..? 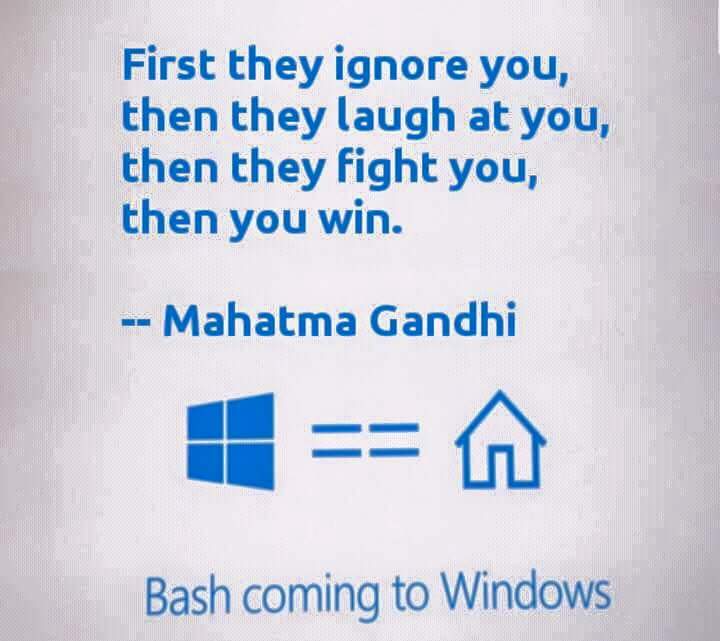 We know that , recently Microsoft announcednative support for Bash shell in Windows 10 .
Weeks after this announcement in microsoft developer conference, windows insider preview was released with this feature.

Mr Swapnil Bhartiya, an open source blogger has written an article which explains meaning of `bash for windows`, how does it work and who actually benefits from this, windows or ubuntu.

As the enterprise landscape is changing -- in favor of Linux and open source -- companies like Microsoft are embracing Linux. Most recently, Microsoft announced support for the Unix Bash shell on Windows, providing developers and administrators with an important tool for managing Unix and Linux servers.

Linux is a dominant player in the enterprise space. Microsoft says that more than 25 percent of machines on Azure Cloud run Linux. This means there's a huge developer base along with a huge administrator base that manages these machines. And, these people need tools to manage their infrastructure.

Microsoft is aware of this increasing demand, and they have tried to bring some basic capabilities like SSH to their PowerShell, but it's not enough. Developers can also use Cygwin, MSYS, or run Linux in a virtual machine, but all these "workarounds" have their own disadvantages and some serious overload.

Virtual machines, for example, are complete operating systems in themselves, they need dedicated processing power, memory and storage. That's not an ideal solution for developers working from their laptops, as system resources are shared between host and guest operating systems that slows the entire machine down.