How To Upgrade Linux Kernel on Supported Ubuntu Releases and Its Derivatives To Ububntu 16.04 's Kernel (linux 4.4.X)

How To Upgrade Linux Kernel on Supported Ubuntu Releases and Its Derivatives To Ububntu 16.04 's Kernel (linux 4.4.X)

You may know that we can get latest stable kernel on Ubuntu from point release( or LTSEnablementStack) which is released by Ubuntu for every 6 moths.
The Ubuntu LTS enablement stacks provide newer kernel and X support for existing LTS releases. These can be installed manually, or are automatically shipped if installing from point releases like.. 12.04.2/14.04.2 and newer release media.

Brand new hardware devices are released to the public always more frequently. And we want such hardware to be always working on Ubuntu, even if it has been released after an Ubuntu release. Six months (the time it takes for a new Ubuntu release to be made) is a very long period in the IT field. Hardware Enablement (HWE) is about that: catching up with the newest hardware technologies.

The 12.04.x , 14.04.x and newer point release will ship with an updated kernel and X stack by default. If you have installed with older media you can use the following to install the newer HWE kernel derived from Ubuntu 16.04 (XenialXerus):

Now run the following command to install linux kernel 4.4 which is provided by Ubuntu as HWE stack


Now package manager will ask for your confirmation ..that whether you want to continue or you want to abort installation process..
So, give Y (yes) and press Enter 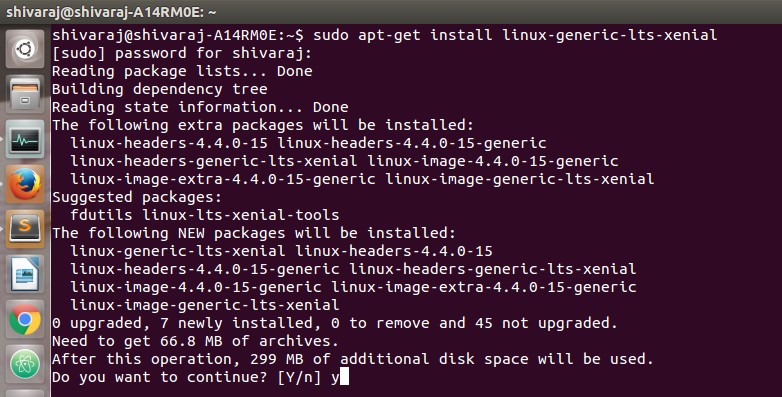 
If you encounter any issues after installing this kernel .. you can easily un-install this kernel.
Run the following command to un install the kernel that you have installed just before.