How To Install WinUsb on Ubuntu 14.04 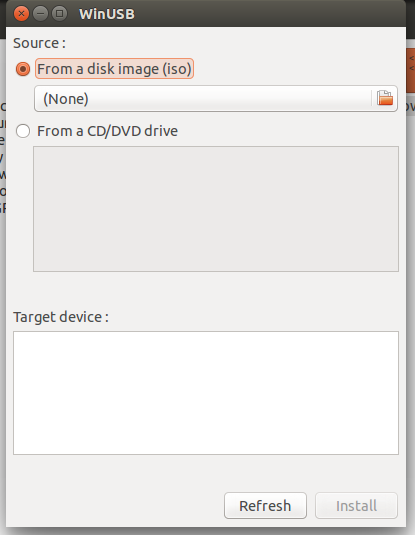 WinUsb is a simple tool that allows you to create bootable Windows USB installer/stick from Windos iso image or DVD on Ubntu Linux.
It includes both command line tools as well as GUI tools(graphical interface).
Until Ubuntu 13.10, WinUsb was available through its official PPA.
Currently there is no updated version of WinUsb available for Ubuntu 14.04.
so to install WinUsb on Ubuntu 14.04, we need to download & install the Saucy version of WinUsb and also need to run dependencies fix switch


Step By Step To Install WinUsb:

How do we kill a resource/process in Linux?

Obviously we find the PID of the resource and then pass the PID to the kill command. Speaking more accurately, we can find PID of a resource (say firefox) as:

alternatively we can use pgrep command to find PID

In the above output, the number '2697' is the PID of process (firefox), use the kill command to kill the process as shown below.

The kill command sends a signal to a process, whose PID is passed along with the command.


Alternatively, we can use pkill command, which kills a process based upon name and other attributes of a process. To kill a process say whose name is firefox, we need to execute:

The kill command has a misleading name because it does not actually kill processes. Rather, it sends signals to them. Each process is supplied with a set of standard signal handlers by the operating system in order to deal with incoming signals. When no signal is explicitly included in the command, signal 15, named SIGTERM, is sent by default. If this fails, the stronger signal 9, called SIGKILL, should be used. For example, the following command would nearly guarantee that process 485 would be killed:

The only situation in which signal 9 will fail is if the process is in the midst of making a system call, which is a request to the kernel (i.e., the core of the operating system) for some action such as process creation. In this situation, the process will die once it has returned from the system call.

To list the signal names, pass the -l option as follows:

There are more than 60 signals that can be used with kill, but, fortunately, most users will only need to be aware of signal 9. The full list is contained in the file /usr/include/linux/signal.h and can be viewed by using kill with its -l option, i.e.,